A few weeks ago I was privileged to attend the Centenary of the Battle of Passchendaele in Flanders, Belgium.  I was invited to attend because I had a Great Great Uncle, John Kimm, who was killed on the first day of the battle, 31st July 1917.

While there it was an honour to sing the song I wrote about him, ‘Hero o’ Your Time’ at the Zero Hour Dawn Service exactly 100 years on from when the battle began and just yards from where he fought and died that day.  Performing the song as the sun rose over the fields of Flanders will be a moment that will live long in my memory.  Here is a video of that moment along with a short interview I done with a local television station.

On the eve of my performance I attended the special centenary ‘Last Post’ Ceremony at the Menin Gate in Ypres, where afterwards I was fortunate to be introduced to the Duchess of Cambridge, who after showing an interest in John Kimm’s story, I presented with a copy of my new album ‘Beinn Alba’ which contains  recording of the song. 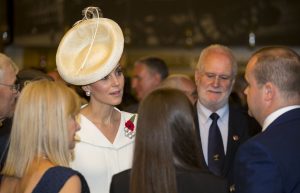