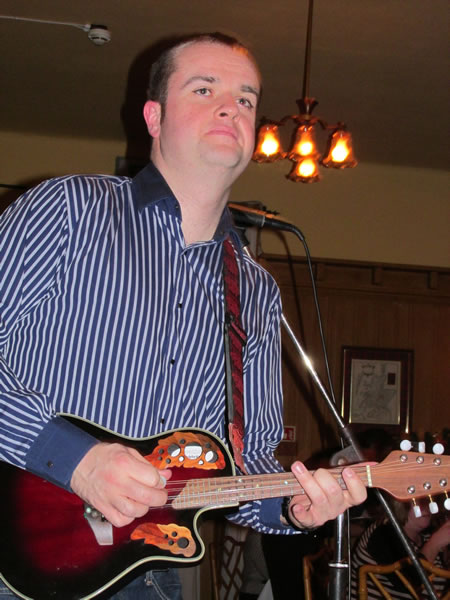 Born in Kirkpatrick Fleming in the South of Scotland Davy has sang and played guitar since he was seven years old and first appeared on stage a year later with his musical hero’s, the Scottish Folk duo Gaberlunzie. He recorded his first album ‘Keeping Folk Alive’ aged twelve and turned professional when he was twenty. Since then he has become a popular and well known face around Scotland and has also performed regularly throughout Europe and North America.

Since releasing his first album Davy has recorded a further five solo albums and two single releases. In 2012 he formed the duo ‘Caman‘ along with Stuart MacKintosh and in 2013 they released their debut album self titled ‘Caman‘. As well as performing in pubs, hotels, halls and theatres throughout Scotland, Davy is a regular entertainer aboard the exclusive Royal Scotsman train and has performed at corporate events for Rolls Royce, VisitScotland and at the Scottish Open Golf Tournament to name but a few.

Over the last few years Davy has added original, self penned songs to his repertoire. The Caman album contains a number of his songs and he is currently writing more for their next album. As well as playing the guitar Davy also plays the mandolin and his live performances usually contain a fair few jigs and reels. Davy now lives in Inverness in the Highlands of Scotland after living for some years in the Badenoch village of Newtonmore where his songs and music became an integral part of the local Shinty club, Newtonmore Camanachd’s, cup winning celebrations. To enquire about booking Davy or for any further information please visit the Contact page.